Fishers’ Tales is an arts-based storytelling project that collects the wondrous tales that fishers enjoy telling about their ocean adventures. Each story is accompanied by a unique artwork. The stories and accompanying artwork seek to highlight the similarities and differences in fishers’ engagements with the ocean from subsistence to recreational; provoking reflection, empathy and dialogue. In this sense, the project hopes to build both awareness and solidarity with subsistence and small-scale fishers, who have enormous knowledge and care for the ocean that sustains them. Fishers story, their observations and the meaning that the ocean holds for them has a lot to offer ocean governance in South Africa and should be an important part of decision-making processes.

The project contributes towards a bigger One Ocean Hub project for inclusive and transformative approaches to ocean governance. The project is managed by the Urban Futures Centre in partnership with the South Durban Community Environmental Alliance (SDCEA), and it is funded through the Deep Emotional Engagement Programme (DEEP) Fund (administered by the One Ocean Hub programme).

The Urban Futures Centre is a transdisciplinary research centre based at the Durban University of Technology. The centre staff work on engaged research that uses an imaginary lens towards social justice and inclusivity to improve the quality of everyday life and the environment in the city. Dr. Kira Erwin headed up the Fishers Tale project with SDCEA, and Karen Ijumba managed the digital storytelling for Fishers’ Tales.

The South Durban Community Environmental Alliance is an environmental justice organization based in South Durban, South Africa. It is made up of 19 affiliate organizations and has been active since its formation in 1995. It is a non-government organization existing solely on finances sourced from funders and sponsors in order to remain totally independent. It makes no profit and exists solely for the benefit of the people it represents. Sherelee Odayar headed up the Fishers’ Tales project with the UFC.

This project explores fishers’ connections and emotional bonds to the ocean using a visual storytelling approach. The stories and accompanying artwork seek to highlight the similarities and differences in fishers’ engagements with the ocean; provoking reflection, empathy and dialogue. While the stories are usually collected through research activities and interviews, the visual storytelling was done by young and emerging artist in Durban. The project specifically aimed to support creative students studying in the city. A special thank you to Liza Du Plessis and Angela Buckland from the Faculty of Arts at the Durban University of Technology who provided support and mentorship to the photography students.

Meet the amazing artists and creatives below who were a part of the project: Thabisile Gumede did the creative writing and story editing for the project. She is a Communications and Media Specialist whose experience spans over a decade. She is passionate about writing and social science research. Her extensive experience in the communication field was honed as a journalist at various National, Regional and Community newspapers. Thabisile holds a Master of Journalism Degree from the Durban University of Technology. Ezami Molefe is a female South African photographer based in Kwa-Makhutha, Durban. She is the founder of Shwaz Image and aspires that her brand will be one of many successful photographing companies in the country and worldwide. Ezami has had the honor of collaborating with The Fishers’ Tale Project which was amazing to be a part of. To view more of her bodies of work, do follow her on Instagram @shwaz._.image. Rohini Amratlal is a Durban artist working with a range of materials to make drawings, prints, sculptures, and installations. She focuses on her personal experiences and connections she develops with various people, touching on matters of race, love and loss and identity in post- apartheid South Africa. She holds an Advanced Diploma in Fine Art from the Durban University of Technology and is an Art Theory Tutor and Student Assistant at the university Art Gallery. She co-curated An Unfurling at the KZNSA Gallery, Durban in 2020. The most recent of her ten plus group exhibitions was Material is Metaphor at the Ammazulu Garden and Sculpture Precinct in Kloof (2021). Nozipho Xaba was born and raised in a small township called Osizweni (Newcastle) at KwaZulu-Natal. Raised by her greatest inspiration Mrs Ntombana Masondo, her grandmother, she is passionate about traveling and photography. Nozipho became fascinated with taking pictures at a very early age, where she used to steal her uncle’s phone and take pictures. Her love of taking pictures grew and she finally had the courage to face her grandmother and tell her that she wanted to study photography at the Durban University of Technology. Nozipho feels a duty as an artist to capture ordinary things, places and make people see themselves differently. Zimvo Nonjola, who is known and goes by the Aphiwe is a 27 year old 3rd year photography student at DUT. Originally from Johannesburg she specializes in abstract photography. Bandile Lethukuthula Gumede originally from Eshowe, north of KwaZulu-Natal started sketching his observations from a young age. Bandile is a self-taught artist, he didn’t study ‘Visual Arts’ in high school. With the hope of always wanting to pursue art as a career, he applied and was enrolled to study ‘Fine Arts’ at the Durban University of Technology. Since his first year at university in 2018, Bandile has taken part in three exhibitions. Bandile has obtained his Diploma in Fine Arts and is currently completing his Advanced Diploma in Fine Art. Kenneth Shandu, originally from KwaMbonambi in KwaZulu-Natal, is a South African practicing contemporary artist who works with a range of materials to make drawings, prints, sculptures, and installations. Currently based in Durban his work addresses issues of economically marginalization in Post-Apartheid South Africa. Through his work, Kenneth expresses his critical views and heartfelt emotions on the above subject inspired by the everyday experiences of small farmers from rural areas. Kenneth has received several awards for his work and won the Emma Smith Art Scholarship award from the Durban University of Technology (DUT). Kenneth has participated and exhibited in several group exhibitions in Durban, Stellenbosch, and Johannesburg. Kevin Ngwenya, also known professionally as Kev Seven, is a Durban graffiti and mural Artist. Born in a small remote town in Ladysmith Kwa-Zulu Natal, he moved to the Township of Umlazi, then later the inner city of Durban, where he developed his love and passion for the creative underworld. He attended Nanda Sooben’s Centre for Fine Arts, Animation and Design in 2010 where his work really took off and found its place, and completed his Bachelor of Arts from the University of KwaZulu-Natal in 2017. It is here that he would combine his intrigue for comic book illustrations and love for the architectural textures of his city. A combination of different fields of study, created a symbiotic relationship between public arts, design and its impact and influence on modern pop-culture Media and society. Doung Anwar Jahangeer is a Mauritian-born architect/artist/performer, who has lived in South Africa since 1992. He works with the transformative role of creativity in building safer and more livable cities. Doung was one of the founders of the interdisciplinary creative collective dala in Durban and is currently completing his PhD at the Durban University of Technology. Doung continues to engage in creative research and practice in South Africa and elsewhere. Lina Macanhe is is a street fashion photographer from Durban, who is passionate about art and telling stories through her eye. Her biggest aspiration is to inspire and bring people together through her images. She aims to grow as an artist and progress more into Documentary photography. Lina exists to be a creative. Casey Pratt is a successful freelance photographer specialising in travel, portraits and more recently conservation. With a strong love for Africa and the environment her desire to inspire change and passion for conservation led her to wanting to continue with the message after taking the photograph and tell stories that create conservation awareness. Casey aims to use her career and passion to inspire change, create awareness and do whatever she can to help people fall in love with the world around them so that they will want to protect and nurture it, as it protects and nurtures us. 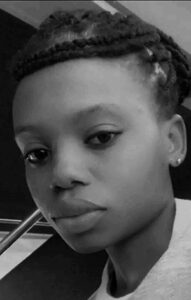 Nompilo Mthethwa is a female portrait /documentary Artist from Tongaat, North of Durban. She is currently completing her diploma in Photography at the Durban University of technology. She had the honour and privilege to be part of the Fishers Tale Project, This collaboration added some light and direction to her documentary side.