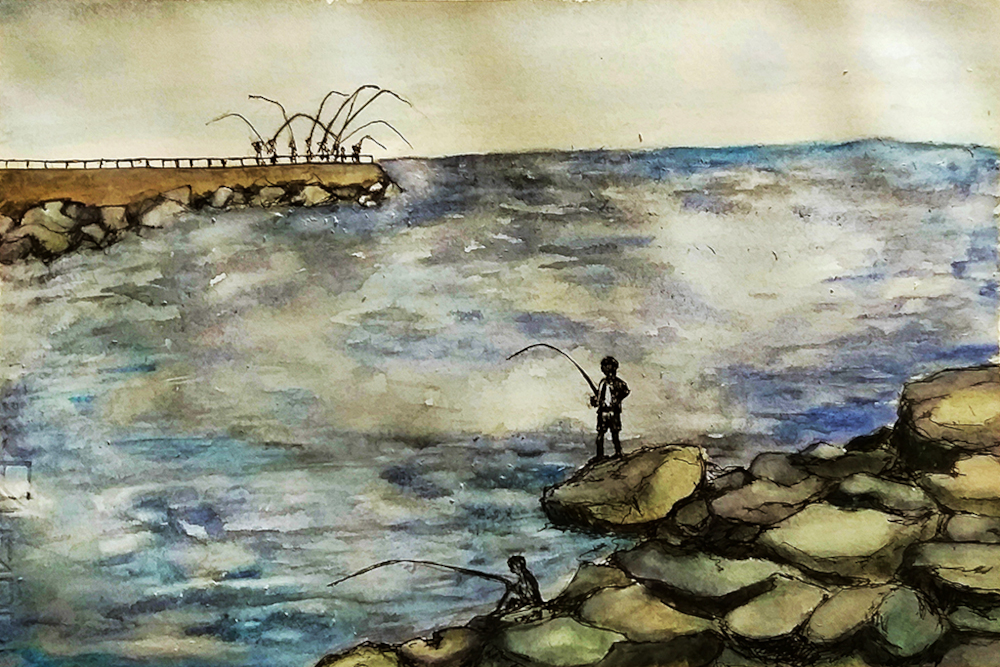 Artwork by Rohini Amratlal, Privilege in the Distance, 2021 (Watercolours on Fabriano )

So, like growing up in Apartheid times, did you face any kind of opposition?

Lots of it. We really tried to keep away from hot spots where racism was rife. Two popular shad fishing spots were at Toti Rocks, Amanzimtoti and Winkelspruit, and you know, we were just like segregated on those rocks. Whites there, Indians here, and yet the Whites were like privileged to flick the line a short distance and catch the fish, but we had to fish closer to the shore. On the rocks, but closer to the shore. These guys were privileged to stay at the front and throw out in the deep and catch their fish. So, while we battle to catch one, that one person could have got about five times more for every one that we catch. And it’s just by luck the fish swim and migrate and come closer to the shore and we catch them, otherwise you’ve just got to hold the rod and wait. We’ve been harassed with violence; Indian fishermen’s rods were broken. So apart from the assault and damage to our tackle, there was damage to our vehicles and derogatory words that they used against us, so it was really tough. At the Durban beachfront piers, it was quite evident that racism really prevailed there because privileges were given more to surfers and swimmers. We weren’t allowed to fish during the day off those piers, we were only allowed to fish from sunset to sunrise making way for swimmers and for surfers. If you were caught, you were charged by the beach authorities and had to pay a fine, and your tackle and all your fishing gear was confiscated. Nevertheless, we caught fish. We just had to stay home and get there towards the evening or overnight. My dad did not have a vehicle and we relied on trains to get to the beachfront. So, we lost the opportunity to catch fish during the day, and had to fish at night. We braved the cold at night. There were lots of racist incidents that we came across during Apartheid, however, there were some whites who were totally disgruntled about what the others used to do to us, and they used to stand up for us and even walk out with us. The perception is that Indians are passive, we do not want to be violent and retaliate. So that’s where they took advantage. I grew up having a scar, knowing that my dad was assaulted just for stepping on a spot dominated by Whites. It was sad, it’s a scar that I’ll never forget, my dad being assaulted and bleeding, and we had to leave the place. Where we do face racism right now is at the marine protected areas where they don’t want you to even walk past on the beach, although you’re not fishing there. These elite Whites, they own properties there and their main objective is to privatise the beach because they want to have freedom and pleasure, they just don’t want fishermen to walk past, let alone fish. It is a big improvement from what it was with regards to fishing in the Apartheid time.