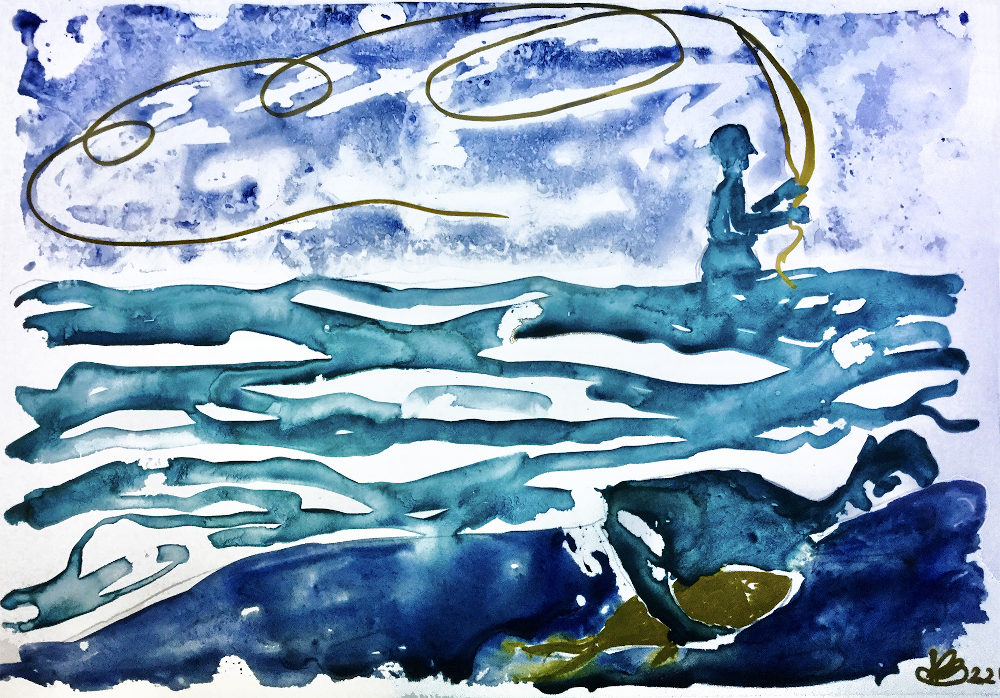 Erhardt is absolutely obsessed with fishing. He lives, breathes it; especially fly fishing in particular. I mean he spends hours a day looking at videos, he ties flies, he’s very into it. His whole identity, all his energy, money goes into fishing. And I can’t quite understand it or explain that kind of passion. I mean it’s the same as in that play where two of the characters committed suicide over the ocean. Erhardt could be in that camp if something like that happened or it was taken away from him, or the ocean was damaged for good and there were no natural areas, he would be suicidal. If there was no fish in the ocean and he couldn’t fish. My word, that will be the death of him. He has loved fishing from childhood. He used to beg his father to buy him fishing gear, he would buy the magazines, get books on fishing; any resource that he could and he taught himself how to fish. He had to teach himself because his father wasn’t really interested. His uncle used to have a boat and occasionally they would, on holidays, go out with his uncle and then his dad would fish, but he says his dad’s a lazy fisherman; not taking it seriously, just there for the company, I guess. But not fly fishing. I don’t even know what inspired him to even start that route because nobody in his family was even doing it. His mother told me a story of when he was a little boy and he caught a fish. He took that fish and he slept with it. He refused to give it away. It was stinking, dirty, it was in his bed, and he was cuddling it. He didn’t want to give up the fish! I always say to him, try and go for your provincial colours. We know people that are doing this and it doesn’t seem too hard. I’m sure he would get his colours, he’s very good. Through him I’ve learnt a lot more about fly fishing than I knew, and it’s a lot more complicated and technical actually. With fly fishing you’ve got to arrive in the area, you’ve got to test the depth and the temperature of the water. You need to look around to see what insects are hatching, what the fish might be eating. Then you’re going to decide at what level of the water you’re going to fish and that’s going to dictate what line, what tippage and what fly you’re going to use. The weight of the rod, the weight of the line, all of these things are like a calculation before you can cast. It works because he catches in all sorts of conditions. Fly fishing is just wonderful, it’s just so beautiful. It really is great. There’s nothing like just standing on the banks of wherever you are just in the quiet early mornings, late afternoons, it’s peaceful, it’s relaxing, you know, it’s beautiful.