The battle for the piers 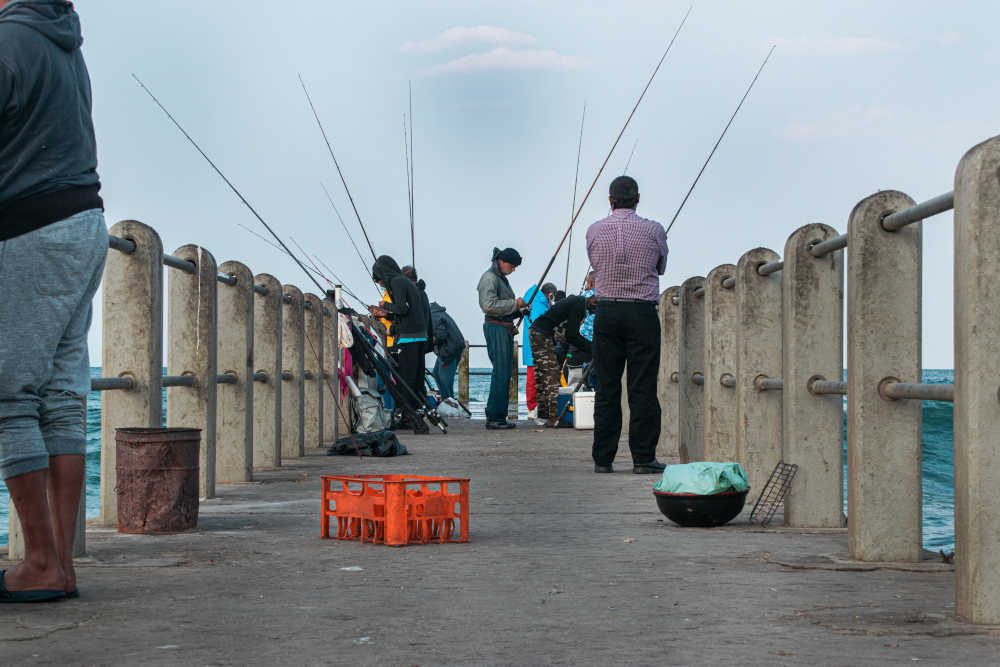 Fishing from a pier is one of the best experiences a fisher can have. But the experience can be marred when the fisher has to contend with political issues of access to deep water piers. Without access to these piers, Durban subsistence fishers have had to frequently engage in peaceful protests in a bid to gain access to the new pier at the beachfront.

Their protests and meetings with the eThekwini Municipality have been to no avail as the pier remains closed off to the fisher folk, but open to the public who walk their dogs, cycle and skate. Piers range greatly in height and length, depending on where you are and the tide. On the current pier that the fisher folk have access to, when the tide is out there is no water around the pier, but sand. When the tide is in, the water bashes over the pier thereby drenching them to the bone. At times it washes out belongings into the sea which is a loss to them. A lot of their tackle, bags, clothes and even bait gets washed off the pier, whereas on the deep-water pier, when the tide goes out; the water doesn’t go right out.

Subsistence fishers claim that the piers are rightfully theirs as they were using them before they were renovated, but they were never handed back to the fisher folk. Now they have to make do with the Snake Park pier where there is a pipe spewing toxic chemicals, human faeces and other toxic waste that is killing the marine life and fish. “We pay for fishing licence and bait licence, and yet we are banned from the deep-water piers. We are fishing to eke out a living and we pray that the President will intervene on the fisher folk’s behalf and hear our cry, as our cries are falling on deaf ears,” explains a concerned Layla.

Some of the excuses that have been presented to the fisherfolk as reasons for not allowing them on the pier is that the fisher folk are too dirty and rowdy to be on the new pier. However, the fisher folk say they have marshals who clean the pier – scrubbing, washing and sweeping it. The fisherfolk have all but begged for the new pier, vowing to keep it clean. The answer has always been “no” yet the same deep-water piers which stand empty at night are guarded by security guards, who with the right incentive, allegedly give access to some fishers at night.

All the fisherfolk can do is hope that that this battle will be concluded so that the next generations will not have to take up the same struggles. “We do not want our children and grandchildren to go through that because we are fighting all our life for this thing. We want to see a better future for them. We want to see them catch fish, enjoy themselves and be surrounded with joy,” hopes Layla.